Real knowledge comes only with inner experience. The rest is simply opinion. -Shushud

Shushud published both of his works in 1958.

Fakir Sozleri: Itlak Tasavvufunda Latifeler [Words of a Poor One] a collection of sayings compiled by Melih Yonsel, was translated into English by Ergin in 1981 and published by Coombe Springs Press in 1982. Fakir Sozleri is still in a private collection, but many of the sayings can be found in Ergin’s The Sufi Path of Annihilation, and we have posted a number of them on this site as well.

The English translation (Muhtar Holland, translator) of Islam Tasavvufunda Hacegon Hanadoni [Masters of Wisdom of Central Asia] was published by Coombe Springs Press in 1983. A second English edition published by Inner Traditions in 2014 is currently available.

The following is a quote from a paper in Ergin’s private collection. We are unaware of the authorship.:

Hasan Bey made an extensive study of the Kwajagon [A group of Sufi Masters and the subject of Masters of Wisdom of Central Asia] and claimed that their teaching is very close to the teaching of Itlak Yolu [The path followed by Shushud and Ergin]. One of the most significant differences is that Kwajagon taught exclusively within Islam, while Itlak Yolu will teach students from any religion. On the subject of religion, Hasan Bey stated: “The five great religions are simply different representations of the same truths. When one attains, one is not trapped by any religion, but one has respect for them all, real respect derived from seeing their real purpose.” 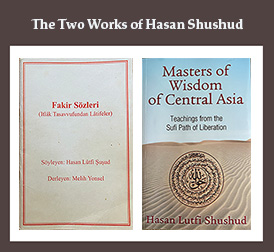 When Shushud was questioned by Ergin about the validity of the wisdom expressed in The Prophet by Khalil Gibran, he responded with the following:

A poet asked, “Tell us about beauty.”

And he answered, “Reach Absence. You won’t need earthly beauty.”

An old monk said, “Tell us about religion.”

He answered, “Reach the source of religion. You will be exempt from religion.”

As Ergin states in the Preface of the 1981 English Translation of Fakir Sozleri, “H.L.S. is a master of Itlak Yolu; the way of absolute liberation. This work is outside the Tourigats or lives of usual Islamic Sufism and has affinities with Buddhism and the Shamanism of Central Asia from the time of Ghengis Khan…This book of aphorisms Fakir Sozleri gives a taste of his approach.”

Do not wander from door to door. What you desire is within you.

With spiritual exercise it is Liberation. With traditions, it is imagination.

The riddle of creation is solved by non-existence.

As does the sculptor, pain chisels you from the block.

Hunger is the bread of the prophets and the morsel of the saints.