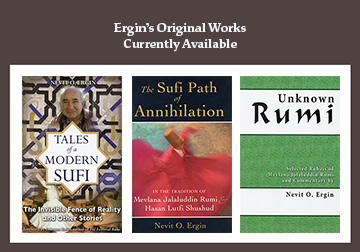 An Interview: The Relevance of Rumi in the Modern World

Dr. Nevit Ergin, a Turkish-American surgeon based in San Mateo, California, and translator of Jalal ad-Din Mohammad Balkhi Rumi’s narrative poetry, visited India in connection with the 800th anniversary of the birth of the Persian poet. Though Ergin is a surgeon by profession, he has dedicated himself to the study of Rumi and his works for the past 50 years.  He also has translated and published Rumi’s complete poetic works into English in 22 volumes under the title Bayaz-e-Kabeer (A Comprehensive Anthology). Rumi, a 13th-century poet, Islamic jurist, philosopher and Sufi mystic has greatly influenced not only Persian but also Arabic, Urdu, Bengali and Turkish literatures and is one of the most widely read poets in the United States.

The following interview with Ergin first appeared in the March/April issue of SPAN, a magazine published by the U.S. Embassy in New Delhi. Anjum Naim is SPAN’s Urdu editor.

SPAN is available in multiple languages on the U.S. Embassy in New Delhi Web site.

An Unpublished Article: On the Self, Annihilation and Immortality

Mevlana’s approach to conflict resolution is simple: “come to me without you, I will come to you without me.” This requirement not only solves, it also prevents conflicts.

“The self is the biggest curse of humanity,

It is a hair in the eye, a thorn in the bottom of the foot.

It impedes seeing and searching for the truth.”

The rain and cold wind went for ten days. Everything outside was wet, the morning gray gradually become darker in the afternoon.

Then, suddenly, I woke up one morning and there was the sun, in a clear blue sky. I couldn’t wait to get out of the house. It was like another town, everything was so different. There were raindrops on the leaves and grass. The earth smelled of a special fragrance.

I thought this was the right day to go to the fair. CONTINUED…

The Most Important Thing

Death will knock on everyone’s door sooner or later, a fact most people don’t want to talk about.  Science and religion do give us various kinds of answers.  But, those answers are all incomplete.  It’s simpler if death and the whole idea of death are avoided.

I’m not so far away from death.  In fact, I’m an old man, with death peering closely at me time by time, kindly waiting until just the right moment.  I’ve thought it was right on several occasions during my downward slide these past three years.  Parkinson’s, sleep apnea, high blood pressure, diabetes, ulcerated feet and legs, GERD, Gout, arthritis, falls, you name it. CONTINUED…

She was a stately, beautiful lady.  Her one foot was soundly grounded on earth; with the other, she was searching solid ground in balancing herself between earth and heaven.

Her educated intelligence had not been satisfied by the answers of science, faith, cults.  None of them answered the crucial question:  “Who am I?”  The usual answers were either semantic or dogmatic, and she had heard plenty of them. CONTINUED…

I was dropped off a sail boat in the middle of the ocean.  “Swim,” they said.  “Take a look at the bottom of the boat.”  They were my mother, my father, the very handsome young man who owned the boat, and his friends.

I had no intention of jumping into the water to see the bottom of a boat.  This strange idea came first from the young man.  His friends joined him with cheers.  When I objected, I found my father, my mother were on their side. CONTINUED…

He was in the air flying for less than an hour and almost completed his schedule. The plane was responding to every maneuver nicely, it felt like he was playing a finely tuned musical instrument.

This was his job. As a major in the Air Force, he tested new sophisticated fighter planes. He checked their capabilities and recorded their performance. CONTINUED…

She was a good listener, and she could make conversation for hours.  Her eyes usually fixed on your face, a quarter smile on her lips. Much later, I came to understand that her constant head shaking was not a sign of agreement, but a defense; instead of disagreeing, she just conveniently shook her head.

Except for two short-lived marriages, she had lived alone for 20 odd years, occasionally sharing her time with friends and relatives .  But, she always had a cat or two or three.  After she retired, she spent almost all her time with her cats, feeding them, playing and talking with them day and night.  The cats were her family. She didn’t need anyone else. She had a small house, a nice backyard.  She was happy. CONTINUED...

Who said that the planet earth is our home, that we live on it?  There are so many other planets in our galaxy, so many galaxies in the cosmos, so many people searching for extraterrestrial neighbors out there “somewhere.”  But, that’s the wrong place to be looking for new neighbors.  Instead, all those people should be exploring their own perception. That’s what he had been thinking. CONTINUED…

I’d belonged to this orchestra for a long time.  I had no particular instrument;   whatever Maestro wanted me to play, that’s what I played.

Not many appreciated the music we made.  Maybe they didn’t understand it.  The musicians in all of the sections were my friends, and we worked in harmony.  Maestro noticed whenever a musician was failing, and when that happened, he warned them, talked to them after the concert.  Usually they were put in a training program.  If their performance still didn’t meet standards, they were dismissed:  Maestro refused to compromise the harmony. CONTINUED…

The train was overcrowded. For three days and nights, without rest and sleep, she was squeezed in among the passengers in a smoking compartment.  All throughout the train, people were sitting everywhere, on the compartment floors, in the corridors, even in the toilets.  All of them were natives, talking, eating , drinking, singing.  She didn’t understand them, not because their language was foreign, but because of all the noise. CONTINUED…

It was a mistake: He didn’t want to be here.  He cried and yelled, but as soon as he opened his mouth, they gave him a tablespoon of the opium of existence.  He instantly saw colorful images, so vivid he thought they were real. He learned about the concepts of good and bad.  One became many.  He lost himself in this multiplicity.

In this strange land, every moment rushed into the next until this insane race ended with each rider riding his horse to death.  Winners, losers, they were all the same, all dumped into the same ground at the end of each race.  The bigger, mightier predators were the winners.  That was the rule of this land.  Their prey had neither chance nor respect. Divine and human justice both accommodated this reality.

He decided to search out the authority who made the rules. CONTINUED…

There is a typically-furnished bedroom with the shades drawn and a complete silence except for a slight snoring coming from Harry who is wearing pajamas and sleeping peacefully next to his wife. A loud sound bursts forth from the digital clock radio, immediately followed by the aggressive onslaught of a disk jockey’s announcement of a new single, the sound of which permeates the room. Again Harry awakens with a headache. Slowly he removes his black eyeshade and walks instinctively to the bathroom with his eyes still closed. The electric percolator begins on schedule. Harry blindly begins to brush his teeth with the electric toothbrush while groping for his electric razor with the other hand. He begins to shave while still brushing his teeth. His eyes are still closed. Gradually coming to half-awakedness; he is ready for the coffee which has just finished perking. He returns to his bedroom, and his wife turns away from him. He sips his coffee and becomes fully awake. There is a mirror in the bedroom with a built-in light which Harry uses to complete his shaving of an area on his left cheek where he has a noticeably large mole. He begins dressing with well coordinated movements. He lightly brushes his wife1s cheek with a goodbye kiss, she responds somewhat sleepily. CONTINUED...