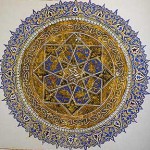 I became the confidant of the One who set out to search.

I became a friend of the One who settled down in the land of Glory.

I saw a dome beyond the six dimensions.

I turned into the floor, the dirt of that dome.

I became blood, effervescence in the vessel of Love.

I became tears in the eyes of His lovers.

Believe me, I became the things

that Jesus and Mary lost.

I turned into wounds and salve

for the everlasting lance of Love.

The angel of death was my company with every step.

I wasn’t worried or afraid of him.

I fought with death face to face.

I derived great pleasure from it.

I threw out the burden of existence.

Then, I stepped into the stirrup of immortality.

Hear my ney* of immortality.

but you can still hear that ney‘s sound coming from me.

I reached the secret of “God knows best.”

Shams of Tebris is the biggest Eid.**

I became a big sacrifice for that Eid.

**Eid In Islam, a religious holiday.